Fall seems to be setting in pretty solidly this week. After having 70-plus-degree days over the weekend, we had a high of about 50, today. At this rate, I might have to put away my shorts for the season pretty soon. (Though... this is Minnesota... so if it bounces back up above 60 any time between now and March, they'll probably be back out.)

Sartorial issues aside, fall makes me think even more about baking than usual. (Not as much as the Holidays, but that's a whole different level of baking for me.) I thought it might be fun to look at some variations on one of the most Midwestern of cakes, the Bundt.

In case you're not sure what a Bundt cake is, I offer you this helpful clip from My Big Fat Greek Wedding:


Okay. Now that we've gotten that out of the way, let's look at the first of the three Bundt cakes we'll be baking this week: a gluten-free (and soy-free) lemon-lavender Bundt cake made by slightly modifying a Martha Stewart recipe. (The original recipe can be found here, on MarthaStewart.com.)

I know that you're probably thinking that the gluten free portion of this recipe is just a gimmicky thing. It's not. A good friend of mine developed a series of massive food allergies a few years ago (long before gluten-free was a grocery store buzzword), and she started searching out recipes that she could bake for herself and eat. As one of her baking friends, I worked with her on a number of projects, and we bounced a bunch of ideas off of each other.

Recently, I started trying out Bob's Red Mill's "One-for-one" gluten-free flour. Basically, this is a flour that can be used straight from the bag in most recipes, without having to add a bunch of other things (like Xanthan Gum) to make it all hold together. It's been a godsend, if I'm being honest. I've been able to bake all sorts of things with it without any problems.

So, when Christopher and I were getting ready to get married this summer, as we were looking at the number of attendees who couldn't have gluten, I asked Kathy for her favorite cake recipe. She gave me this one, and I made a few changes (which we'll discuss as we go along).

For the soy-free part (another of the massive food allergies), I make sure to bake this with butter, though my go-to is typically margarine, unless a recipe specifically calls for butter.

For the most part, I followed the recipe pretty much as written in the original - using the 1-for-1 GF flour in place of the all-purpose flour.

I mixed my buttermilk with my lemon zest, juiced my lemons, and blended my dry ingredients a separate bowl. 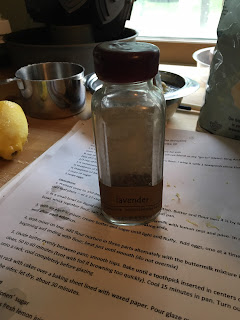 Then I added my secret ingredient (which apparently wanted to stay secret, because this photo really didn't turn out well): Lavender.

Lavender and lemon - if you haven't had it - is an amazing combination. I've found that a good rule of thumb is to use about the same measure of lavender as you do lemon zest. I've also found that you'll get more flavor from the lavender if you crush it a bit and let it soak in your liquids before blending it into whatever you're working with. In the case of this cake batter, I measured out about as much lavender as there seemed to be lemon zest, crushed it in my palm, and then dropped it into the buttermilk to infuse until I was ready for it.

Before I went much further, while the oven was preheating to 350 degrees, I prepped my 12-cup Classic Bundt pan. (I have to admit that I love living near the Nordic Ware Factory Store - you can get almost any shape of pan that they make - plus they do some great deals. One of the other two Bundts I'll be featuring was done in a pan I bought specifically for it the day before.)

Although there are many different ways to prep a pan for baking (not the least of which is with a basic spray to get into all the nooks and crannies), since I was baking this to be Gluten Free AND Soy Free, I wanted to control exactly what went into the pan.

I melted some butter on the stove, used a basting brush (and my fingers) to rub the melted butter everywhere, and then shook in some sugar to coat the pan. Yes, you can use flour, but sugar will caramelize along the way and, when the cake cools, will give you a sweet crust on the outside of your cake. (I learned that trick from Christopher.)
So now it was time to assemble the cake batter. We start with creaming the butter and sugar and adding the eggs one at a time. 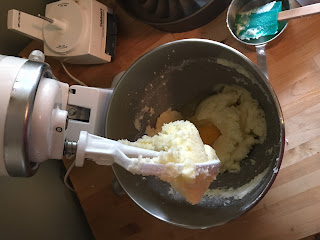 Then there's the piece that makes me happy our Kitchen Aid mixer has it's pouring shield: You need to add the flour mixture and the liquids in alternating amounts (three flour, two liquid, starting and ending with the flour). Without a pouring shield, this would probably have resulted in me coating the entire kitchen in flour. 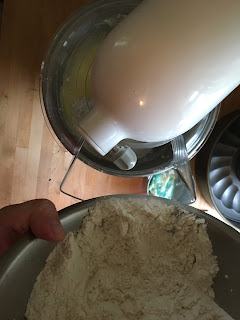 I'm always surprised at how... non-cake-batter-y "real" cake batter can be. You know how, when you do a boxed mix, it just pours? That doesn't happen with a pound cake. A pound cake needs a spatula, and needs to be manipulated in the pan to make sure it is evenly distributed.

Bundt cakes (and pound cakes in general) take a long time to bake. This one takes "50 to 60" minutes, if you're baking based solely on time. I typically set the timer for the earliest time, and then start doing the toothpick test and adding time as needed. The recipe says to tent foil over this cake if it starts to brown too quickly, but I didn't have any problem with that. 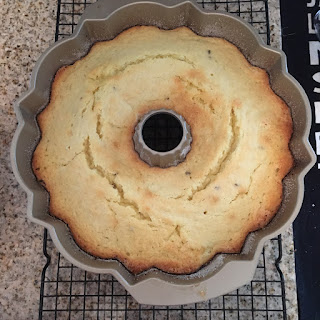 Fifteen minutes with the cake sitting on the rack, still in the pan, just kind of taunting you, can be difficult. But this is what allows the cake to solidify so that you can flip it out without having to shift gears and present your guests with a trifle, instead.

I always do the "put the rack over the pan and flip it all at once" thing. I won't lie - I'm lucky to have long fingers and wide hands, so that that is possible with a Bundt pan. I still end up burning myself about one out of every three times I do this. And I do a combination of swearing and praying an average of one out of ever one times I do this.

After the cake cools - which can take forever if it's sitting in a warm kitchen, or almost no time at all if you set it in front of an air conditioning vent or on a table in the porch where the temp is 20 degrees cooler than the house - you can serve it as-is, or add a glaze.

Because I like to really amp up the lemon and lavender in this one, I vote for a lemon glaze (Martha's got one on her website, too.) The original recipe calls for only lemon juice with the sugar, but I like both the look and flavor of the lemon zest. So I add about a teaspoon of zest - as well as a teaspoon of "bruised" lavender.

When you mix it up, the glaze needs to be a consistency that will "flow" but won't "run." I know that the recipe gives specific amounts, but I always end up going back and forth adding more sugar, then more liquid, then more sugar, until I get to something like this: 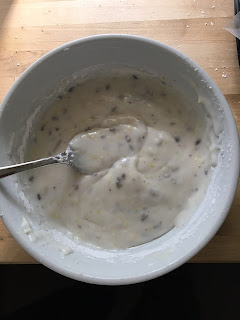 Spooning this over your cooled Bundt should result in it running down the sides, as well as into the signature center hole.

(Martha suggests that you do this while the cake is still on a rack, and that you put waxed paper beneath the rack to catch all of the drips. That's probably a really good idea. Granted, it's not what I did, but it's a good idea, nonetheless.)

One of the great things about Bundt cakes (and pound cakes) is that most of them tend to be fairly sturdy and, thus, movable. After the glaze had stopped running, I transferred this one to a plate with a "doily" made of cut parchment paper (which - in what felt like a Martha-worthy move - I trimmed to have an edge which mimicked the cake's design). 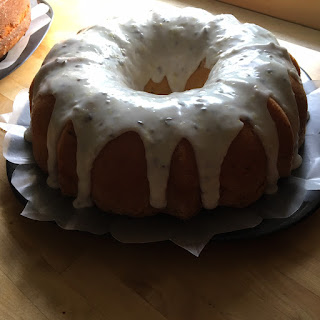 I don't actually have a "slice" picture of this cake, because we took it to a birthday party, along with three other cakes - two of which we'll be discussing in the next few days. I can tell you that - even with the GF flour - this has a "pound-cake dense" but springy texture.

As a pound cake, it's perfect for summer - zesty and floral. As a Bundt, it's the perfect way to say goodbye to summer, and welcome the start of fall. 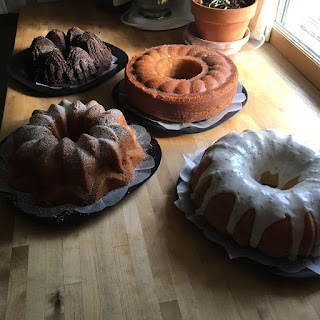 Having tasted the lemon/lavender bundt cake at your wedding -- it was delicious! :-)