In my quest to use the yeast that we bought a couple of weeks ago - and also in an attempt to work my way through learning some bread-related techniques, I decided that it might be fun to celebrate Easter with doughnuts. 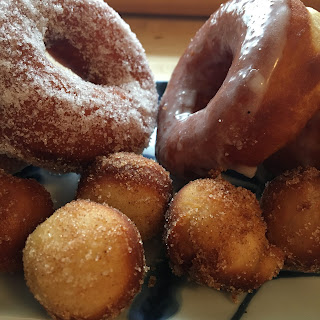 I even committed to getting up early to make them so that we could have them for breakfast (since we're planning to just have a big afternoon meal, and not three squares today). I figured I'd get up around 7, and we'd be good to go by around 9:30 or so. (Let's just call that foreshadowing by an unreliable narrator, shall we?)

Don't get me wrong. We did have doughnuts for breakfast. It was just a tad later than we'd expected. But here's what it was like when I started at about 7:25:

I kind of half apologize in advance for the Easter pun.

This is where I would usually post a photo of the recipe, but this time I'm just going to link you to Alton Brown's recipe over on the Food Network website.

I'd also like to state at the outset that I made a half batch of the dough, instead of a full batch. As much as I could probably have eaten a full batch of these in one sitting, I don't think that the two of us really needed that much temptation in the house when we're both working from home.


Because we were doing the half batch, some measurements got a little odd. Like trying to figure out how to do half of 1/3 cup of shortening:
The first real step of the recipe still confuses me a bit, even after doing it. You're supposed to warm the milk on the stove until "just warm enough to melt the shortening" and then pour the milk over the shortening in a small bowl. (Prepare yourself for exciting action shots...) 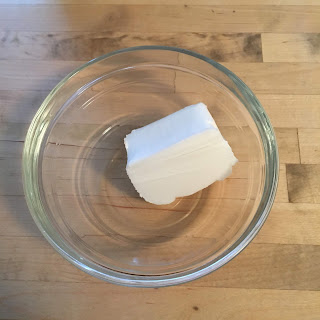 3/4c milk heating on the stove:
Looking at it at this point, I'm really not sure why we couldn't just put the shortening in the pan and heat it until it melted. 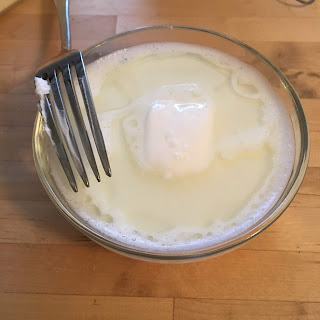 1/6c of water, between 95 and 105 degrees Fahrenheit:
The equivalent of one packet of yeast (2 1/4 tsp), sitting in the warm water to dissolve/bloom, and the shortening/milk, which I had to put into a bowl with cold water to try to get it cool enough that it wouldn't immediately kill the yeast: 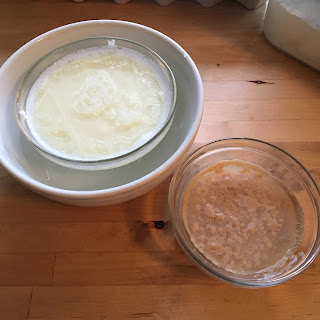 Thankfully, we have a digital kitchen scale, because otherwise trying to figure out 11.5 ounces of flour would have been a bugger. 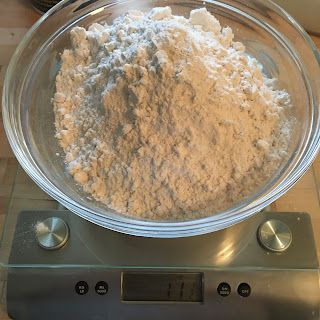 As someone who usually bakes things that are wet ingredients in one bowl, dry ingredients in another, it was a little strange to me to just dump the milk/shortening, yeast/water, nutmeg, sugar, salt, and half of the flour into the mixer all at once. But that's what the recipe said to do, so... 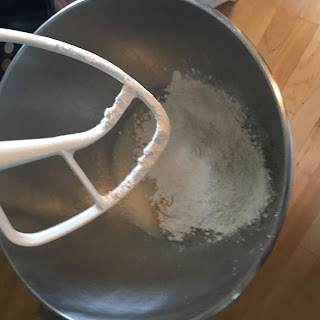 After the first half of the flour went in, it was still pretty liquidy: 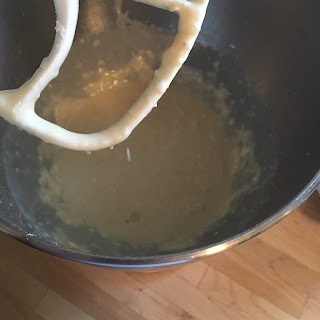 But the second half of the flour gave us a sticky mess (which I knew meant we were on the right path): 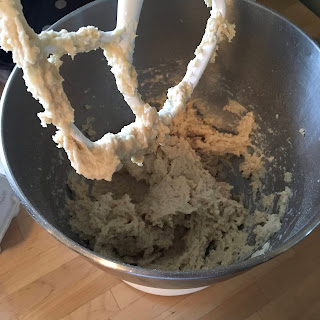 I switched from the flat beater to the dough hook and let it run for a couple of minutes, then stopped it to check on it, and found this:
So I turned it back on and let it run. The recipe said to go for 3 or 4 minutes, but it took about 6 minutes to get it to this point:
Covered with one of the beeswax cloths, and up it went onto the top of the fridge for an hour. 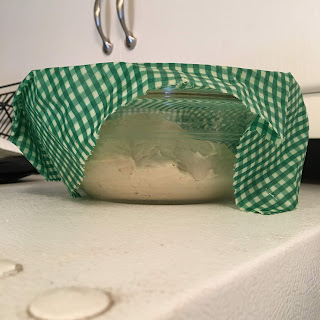 If you've been following my blog for a while, you know that I'm a huge fan of recipes that don't take a lot of prep and that don't use a lot of dishes. In large part, that's because we don't have a dishwasher, and I don't like having a messy kitchen.

This recipe is not one of those "self-tidying" recipes. At this point in the process, my counter looked like this:
An hour (and some kitchen tidying later), the dough had risen to this:
Rolling it out was really easy. I honestly had thought that the dough might put up more of a fuss. But it was done before I had really started - and, frankly, I might have rolled it thinner than the recipe wanted.

Next up was the cutting of the donuts. The recipe says to use a 2 1/2-inch doughnut cutter. We don't have one of those. What we do have are biscuit cutters. So I started with just making the outer circles, and then had to figure out what to use for the inner cutter.

The first thing that I found that was round, small - and relatively sharp - was metal pastry/frosting tips.
The whole batch, according to the recipe, is supposed to make 20 to 25 of the 2 1/2-inch doughnuts. But I made 10 of that size PLUS 3 larger donuts out of my first rolling of the dough: 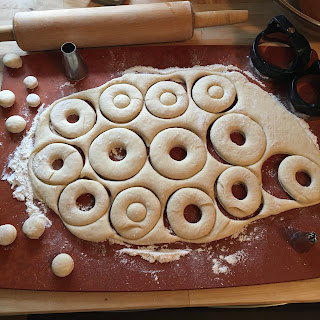 By the time I was done, I had about a dozen of the "small" ones and another half dozen of the large ones, plus all of the doughnut holes and some leftover bits.
At this point, it was time for another 20-minute rest under a tea towel. 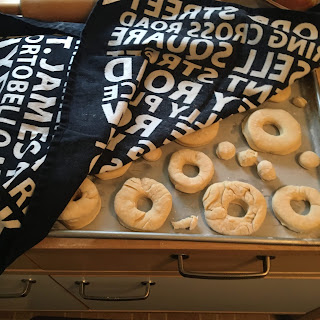 Finally, with the cover off, they were all kind of pillowy and ready to fry. 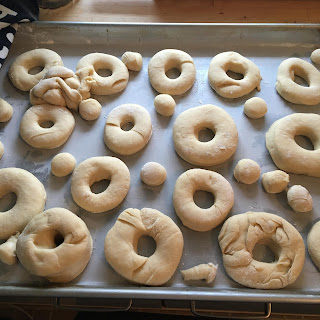 My oil was up to about 365F - perfect.
The first doughnut went in on its own - just in case I had done anything horribly wrong. About a minute on the first side, with its bubbles propelling it around the pan.
After the first minute, doughnut number one got flipped. And... oh... it smelled so good! 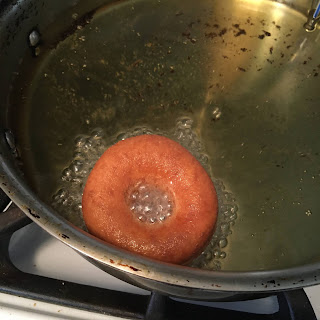 In the meantime, I had poured some sugar into one bowl, and made a quick glaze (powdered sugar and milk - just slightly thicker than you might think it should be). 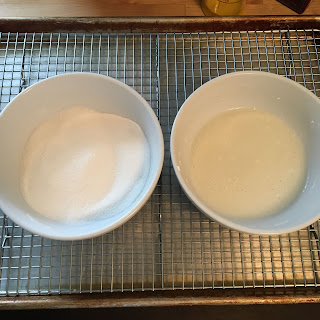 I used a long spatula for the flipping and the removing from the pan. You do want to try to let the oil drip off before moving on with them.

The first doughnut went into the sugar, which you want to do while they're still warm so that the sugar sticks to the doughnut. 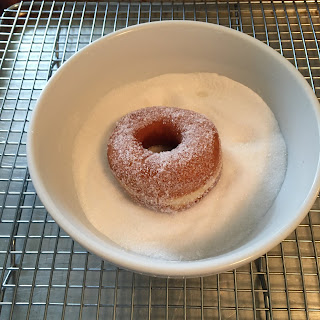 Then I started going for larger batches (and turning the heat on the pan up and down to try to stay close to the magical 365 marker on the thermometer). 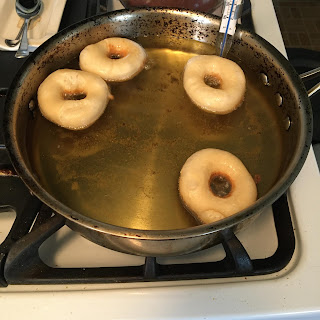 Something I learned today: doughnut holes don't like to be flipped over once they've started to cook. The browned sides tend to want to stay down, and the light side (presumably airier and lighter) stay up. I did find, eventually, that if you allowed them to stay along the sides, they were more prone to stay flipped when you maneuvered them. 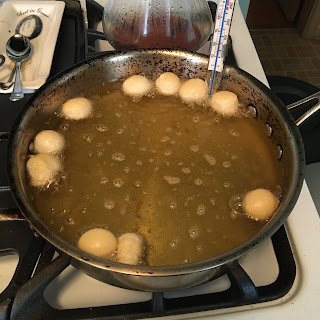 I don't have any action shots of me dipping the doughnuts into the glaze. Here's the thing, though: unlike the sugar ones, you need to let the ones you're going to glaze cool just ever so slightly before dipping them into the glaze. Why? Well, for one thing, I was using my hand and I didn't want to burn myself. But the glaze will also melt and completely run off if the dough is too hot.
So, they look like they're supposed to look, but how were they?

For once, a thumbnail that actually explains the video!

Apparently my phone was frustrated with having to do so much early morning work on a Sunday, though, so here's my wrap-up wrap-up:

The verdict from Christopher was that the crispy outer edge was great, and the inside of the doughnut was actually a very good texture. His one callout was that the dough wasn't as sweet as he might have expected - but had we glazed the all around (instead of just on the top) that might not have been a problem.

And, to answer my own question from the video, above: Yes, the larger ones were a slightly better texture than the smaller ones. 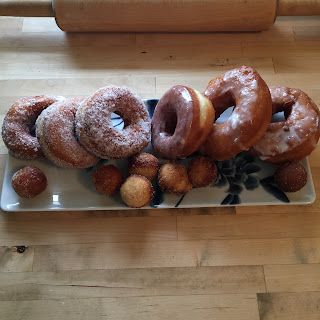 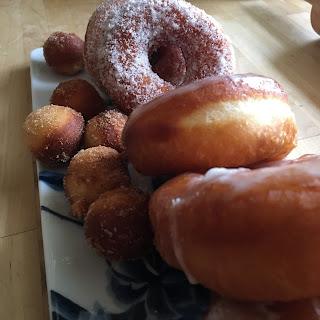 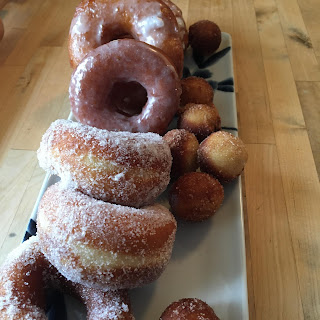 As for the snow I was mentioning, here's what it looked like outside at about 12:30 this afternoon:
OH - And part of why I was frustrated by the timing on these doughnuts was that I had initially planned to do a chocolate glaze. But to do that, the main recipe says you should let the doughnuts cool for 20+ minutes, and then once you put the glaze on them, the glaze is supposed to set for half an hour. So, although I got out all of the ingredients (below), I just didn't want to add another hour to the time. 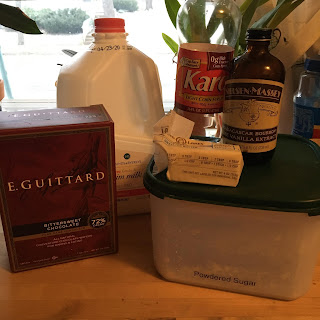 -----
So... Who wants to make bets on what my next yeasty adventure will be? Any guesses? I have a pretty good idea, but you'll have to wait to find out. (And I might change course, depending on what you all vote for...)