New technology has made its way into my hands, recently. Last year, it was a new iPhone (which got us more photos with less waiting). This year, it's a new (refurbished) MacBook, which - as you may have seen in the second bread dough post - makes it much easier for me to post video.

With that in mind, let's dive into this new (to me) technology...

NOTE: All joking aside, raw flour and raw eggs can be health hazards. Proceed accordingly.


Now that you know what we're making, let's get to the basics, starting with the recipe and ingredients.

As you've heard/seen in the video, here are the key recipe for Sugar Jumbles (using just white sugar)... 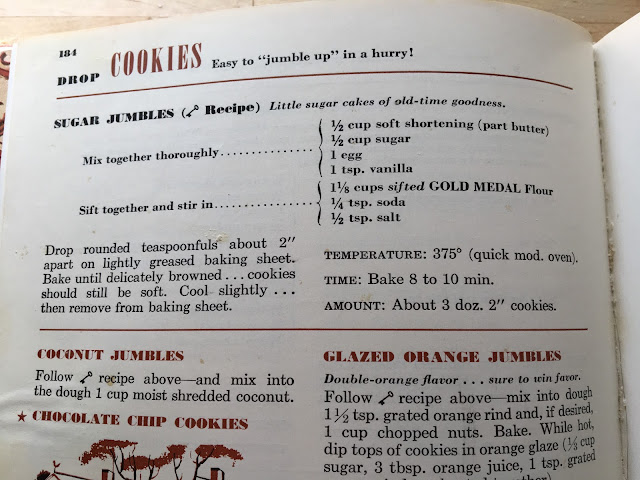 ...and also the recipe for the Chocolate Chip Cookies (with white and brown sugar), themselves: 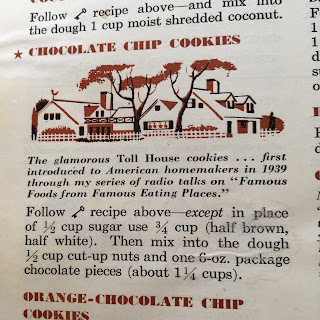 All things considered, there aren't too many ingredients. (If you ask me, it takes less time to make these from scratch than it does to use a cookie mix...) 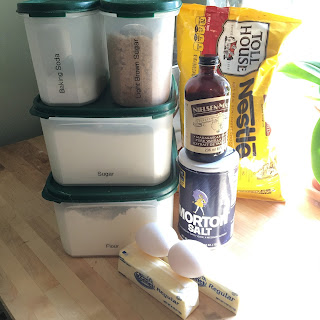 Oh. Sorry. I'm going to interrupt myself, here, for a quick explanation...


Now that we've got that taken care of, on to the mixing and making. We'll start with creaming the equal amounts of brown and white sugar with the margarine. (Remember: If you're doing a single batch, you'll have less stuff in the bowl as you go along.)
To the creamed mixture, we add the rest of the wet ingredients:

Into the wet go the dry... which are supposed to have been sifted together, first. The reason for that is because you want to make sure that the soda and salt are equally distributed throughout the flour before you mix it all into the wet ingredients (because, obviously, you don't want some cookies to rise and others to stay flat).

As you can tell, I didn't do that. What I did/do instead is add the soda and salt, first, then add the first portion of flour (I always add the flour in one cup at a time, to make it easier to mix in). That seems to work well to distribute the leavening (soda) and salt.
In case you're still wondering about all of the kitchen math involved in this doubled recipe, here's a nifty little thing that just happens to work out: by using the 3/4-cup measure for the sugar, I'm also able to use it for the flour. How? Because a double recipe of this calls for 2 1/4 cups of flour. That's 9/4 cups of flour - or three scoops of 3/4 cups each. (Let's face it. I don't have a dish washer and every extra dish or utensil that I don't have to wash is a bonus.)

After the flour has been mixed in (if you're doing my three 3/4-cup scoops method, you can just add each one separately), then you get to add in the chocolate chips.

The recipe calls for 1 1/4 cups for a single batch - which would be 2 1/2 cups for a double batch. But, look at how the ratios look in the following photo. What do you think? Does that look like a good amount? I'd say yes. Here's the thing: That's actually only 1 1/2 cups (or two 3/4-cup scoops) - and I think that it's plenty.
You know I tend to go old school with my baking so I still use the papers from the softened margarine to grease the pans.
I tend to use a smaller cookie scoop (see below for a comparison) - which is the size described in the recipe, and I can put 24 cookies on a half-sheet pan, with plenty of room for them to bake. 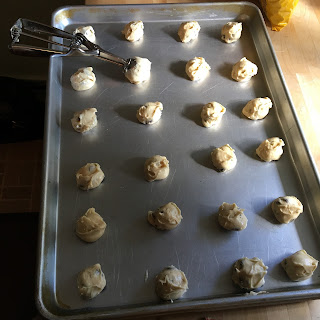 You can use a larger scoop, but you'll want to give yourself a lot more space:
They bake for about 8 to 10 minutes (if your oven is behaving), and I typically take them out of the oven when the bottoms are browning up and tops no longer look "wet." They won't have "set up" (they'll still dimple if you touch them), so you'll want to let them cool for a little bit on the pan before moving them to a rack. 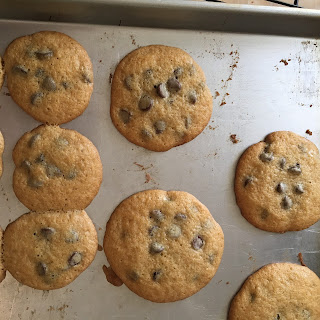 If I'm going to be packing these up to ship them (see how I do that in the video, below), I usually pack them before they're completely cool. Otherwise, I let them cool on a rack before putting them in airtight containers so that they don't all stick together.

By the time you're done baking (because you're doing multiple batches), you'll probably have time to do all of your dishes and pack up any "leftover" cookie dough for later. (I really like having a little bit in the fridge so that I can make myself a nice, hot, chewy cookie on a particularly bad day.) 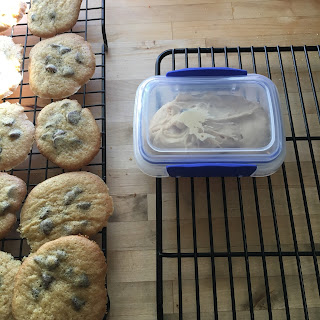 At this point, you can pack them up to give away (again, see the video below), or... 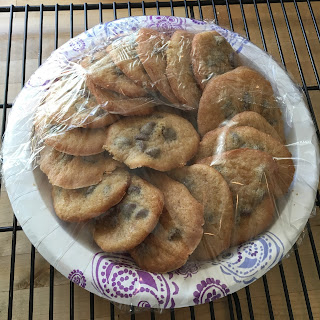 (Be forewarned: there's a debate of epic proportions in the following seemingly innocuous video.)
I was doing so well - right up until I couldn't get the video to stop recording... oh, well.

...get a plate and a glass of milk and enjoy! 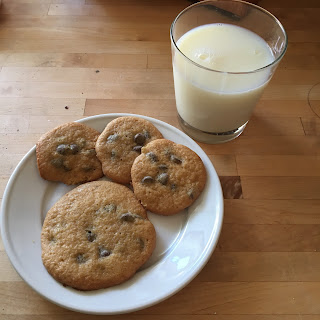 What food should I work on, next? Let me know and I'll see what I can do!

Oh, and as a bonus thank-you to you for reading this far, I offer you this quick video of me and my technological terminology confusion. If you can answer the question that I sort-of pose, I'd greatly appreciate it!

I like the inserted videos. But admit, on first quick read, I didn't feel I had time to listen to them. So just listened now.
I think, since it was "color-commentary", you could continue to do them without impacting the recipes for those with less time.
(It was nice to "see/hear" you.)