First, let me say that - yes - you read that right. 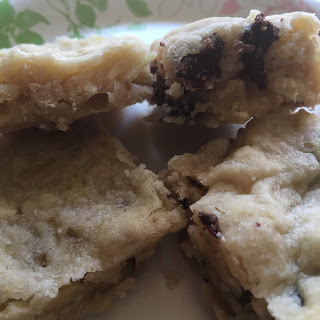 After all the times that I've asked whether any of you had a recipe that you'd found that you wanted someone else to try out, first, someone actually took me up on it. So this week, we're working with Potato Chip Bars from "Company's Coming: 150 Delicious Squares" by Jean Paré. (The recipe was sent in by someone we'll call CindyfromIdaho.)

Let me explain a bit more before we go into the recipe:


So... Yeah... Not kidding about the potato chips. Here's the recipe: 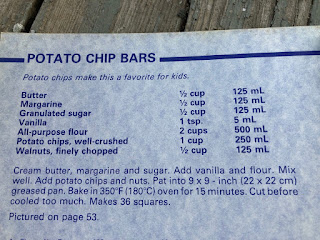 And here are the ingredients:
Honestly, considering there are only 7 ingredients, it's a really quick-and-easy snack to make if you're so inclined.

You start with the basic creaming of shortening and sugar and vanilla:
Oh. The vanilla was apparently supposed to go in with the flour, but I figure it works well either way. So then the flour went in by itself.
After a good stirring, it came out like a cross between a shortbread crust dough and a thick cookie dough.
The next step started with a question for me: How many cups of potato chips does it take to make one cup of crushed potato chips? And does it matter what kind of chips you're using? (This explains why I bought two large bags of chips - I had no idea how far down they'd crush.) 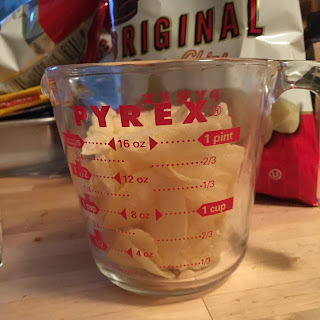 ...to equal one cup of crushed chips.

Which also resulted in multiple hand-washings, because potato chips, in general, are really greasy. 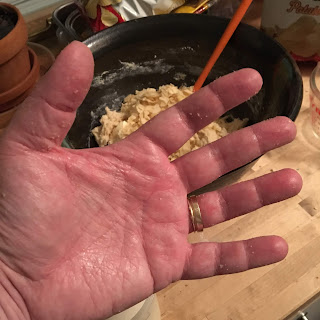 In went the potato chips... 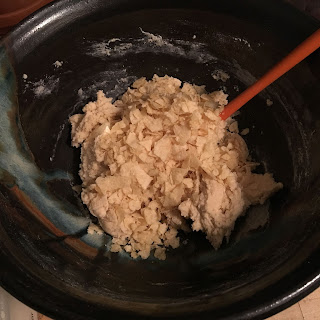 ...and the chopped walnuts.
I probably shouldn't have been surprised that the dough got "softer" when this all got mixed in. After all, I wasn't just adding a bunch of dry ingredients - I was also adding a bunch of fat. 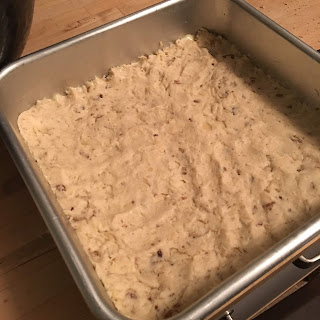 Although the recipe refers to a photo on another page, I didn't have the photo to go off of, so I had to rely on the recipe: 15 minutes at 350 degrees. So, while that was going on, I prepped batch number two.

In the second batch, I used the rippled chips, and instead of walnuts I went for chocolate chips.
When the first batch came out of the oven,
the second batch was ready to go in.
I opted to put it in for about 20 minutes, due to the thickness of the dough, and it did get just slightly brown around the edges before I took it out.
At which point I was faced with two pans of Potato Chip Bars staring at me from the counter top.
I let them cool a bit, but didn't want them to cool "too much" (see the recipe), and then it was the moment of truth. (It became a kind of longer-than-usual moment of truth, so please bear with me.)


I actually waited a bit to write this up, so it's now Saturday (I baked them on Friday evening), and I've had a chance to try them fully cooled.
Three things this has taught me:

1) It was a good thing I cut them before they completely cooled, because now they really crumble when you try to cut them.
2) They did firm up a bit, and they feel less greasy now that they're cool.
3) Crushed potato chips are a weird texture - whether the bars are warm or cool. But - if you must have them - the "regular" chips do better in this than the "ripple" ones.

Now, I fully admit that I have a whole lot of strange recipes in my repertoire - things that I'm sure other people wouldn't like, but I love because I grew up with them. And there are newer recipes that I've tried that I've kind of been won over by because of their weirdness.

Will Potato Chip Bars be the next thing added to that list?

Will some strange recipe that you've come across be added to my list? We'll never know unless you send it to me!


Yeah... no... "sugar" was not the "sh" sounding word that came to mind last night, when pretty much all of my mise en place was mis-un-placed. 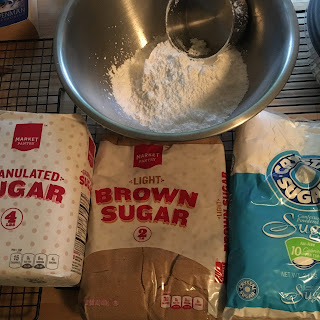 Unfortunately, because that set me back a bit, this is going to be another week without a recipe.

There is, however, an explanatory video:

And now we have sugar. But I have no time. (Sorry.)

-----
So, what's the worst kitchen supply miss you've had in the recent past? Did it delay you a night - or longer? Or did you get creative and substitute (like I did with this post)?

Posted by Robert at 8:44 AM No comments: