Some of you may remember that about a year and a half ago I went through a Bundt-baking phase. (If you want to revisit it, you can start by searching for the label "Cake" in the posts.) 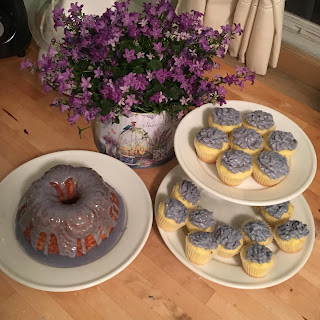 Well, last week at work my company decided to have a cupcake bake-off (because everyone wants to make everything a competition), and I was stumped about what kind of cupcakes to make. Most of the cupcakes I've made in my life have been from a box. With frosting from a tub. Honestly. The whole from-scratch cake baking thing happened much more recently.

So I was thinking of what kind of cupcake to make that wasn't out of a box and I decided to just miniaturize a cake that I like to make. Let me explain:


Two things about this video:
1) The small Bundt pan doesn't play that big a role, but I like the screen capture, so I went with it.
2) The word that doesn't seem to make sense in the middle of the video is "sake" - though I seem to have pronounced it as "sike" for no apparent reason.

As I mentioned in the video, I'm not giving you the full step-by-step instructions, here. The recipe and the how-to can both be found at the original post: Baking Weather.

Even so, I did get out all of my mise en place-type stuff:
Have I mentioned, yet, that Bob's Red Mill Gluten-Free 1-to-1 Baking Flour now comes in a resealable bag? (I buy it at our local co-op, but that link goes to their website in case you can't find it near you.) 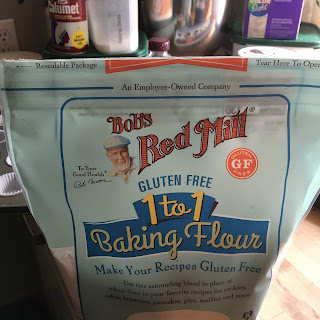 I've been keeping it in Ziploc bags for ages, so this was a bit of a thrill for me.
But, anyway, let's assume that you've gone through all of the creaming and mixing and liquid and dry ingredient rounds, and you've got your batter ready to go. And - instead of using a Bundt cake - you're putting it into mini cupcake wrappers. Your smaller cookie scoop (the one that says "100" or "00" on the side) is a great size for this. 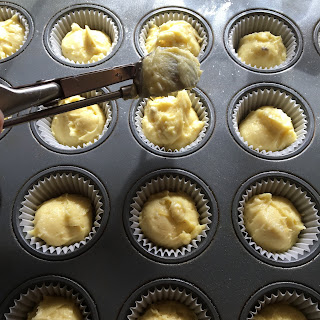 But you'll want to use it at its fullest so that you get the cups at least 2/3 full. 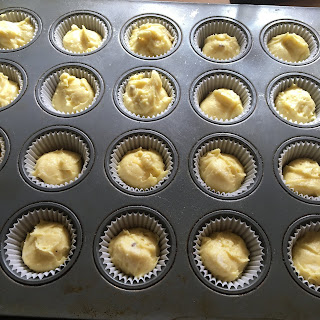 That way, when they rise, you'll get a nice shallow dome, without too much of the "muffin top" thing going on.

When you're making a Bundt cake, the recipe often says to "smooth the top" before baking. This is because it's not going to "poof up" as much as a lighter cake. I probably should have done that with these, too, to avoid the bumpy tops on some of them. 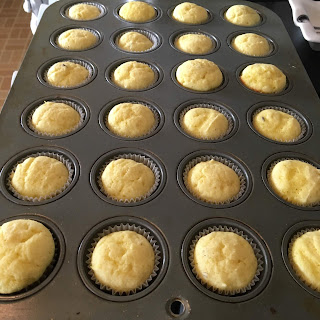 With a little cooling time (I waited about 5 minutes), they were ready to take out of the pan. 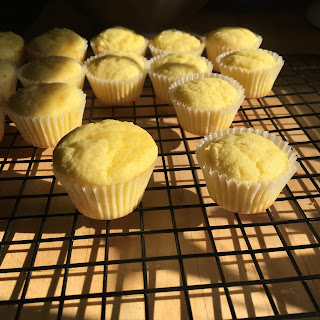 And - maybe another 5 minutes later - I was ready to try them out. 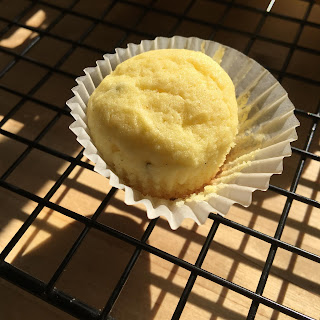 Not gonna lie: I was very happy with how they turned out. 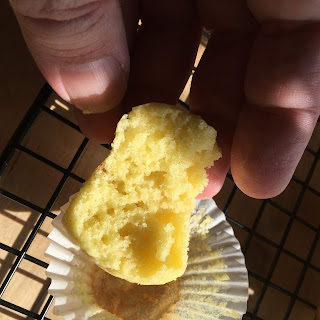 I follow a pretty basic recipe when I do frosting: powdered sugar and liquid and maybe some flavoring - and a little margarine to help it stand up. How much? I have no idea. Basically I use enough sugar and liquid to make it the consistency I need at any given time.

Because this has a lot of flavor going on, I started with that. About equal parts lemon zest and crushed lavender.
A certain amount of lemon juice and some soft margarine. 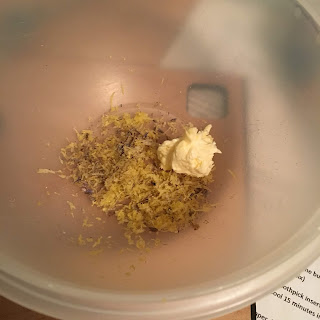 And enough powdered sugar to cause a serious mess when you first start stirring. 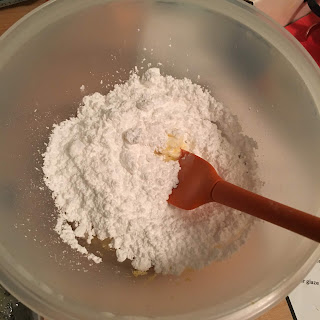 I also started adding food coloring pretty early, to make sure that it would get evenly stirred in. As usual, somewhere along the way pale purple became cement-looking.
I had a few issues with the decorating tips, because the lavender and lemon zest kept getting stuck in them. I started with a star tip (on the left), then moved to a ribbon tip (middle), and finally ended up with a leaf tip (on the right).
After I got done frosting all of those, I thinned the frosting out a bit and drizzled the small Bundt. 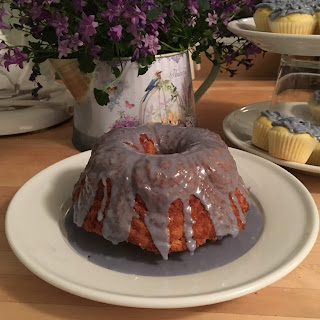 Let's recap. (I was going to say "Do a quick recap" - but you know that's not how these work.)

Full disclosure: I did not serve the Bundt at Book Club. We dined on mini-cupcakes, instead.

And... well... I thought that's where this would end. One more pretty shot of the final set-up, and we'd be on our way: 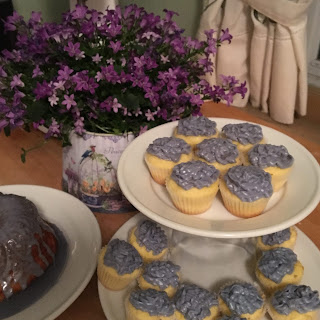 So I put my lavender-gray cupcakes into my Tupperware container and went to bed.

But... well... I forgot one important thing: I used lemon juice as a main ingredient in the frosting. And lemon juice can do some funky chemical reaction things. Like... well... it might be better if you see it for yourself.

This is what I saw when I opened the Tupperware at work before the bake-off: 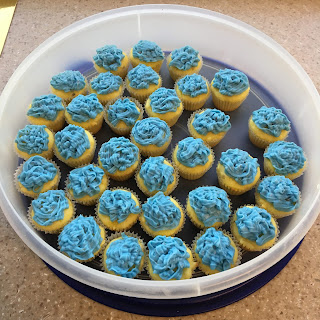 And, yes, the same thing happened to everything I'd left at home, too, so this is what was on the table for Book Club. (Don't believe that this color change was real? Some of the cupcakes below are the same ones that were in the "three different tips" photo, above.)
Oh... and this is why I didn't serve the small Bundt. Because it looked even more space alien-y than I thought it looked in the video. 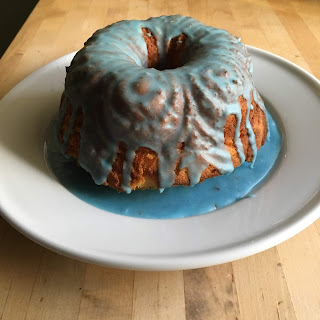 I don't know, yet, how the judging went at work. I do know that I was up against a tiramisu cupcake with a mascarpone frosting, and two different cupcakes with fresh berries. And... yeah... my lavender cupcakes were bright blue.

Hopefully I'll find out before my next post so I can let you know.

-----
What's one of the weirdest things that you've had happen in the kitchen? Did you eat whatever it was, anyway?

How Has It Been 6 Weeks?

I cannot believe it has been six weeks since I last blogged. Well, actually, I can - but it's just weird.

When last we met (pre-Valentine's Day), I was fighting off a low-grade cold that I'd been fighting for probably a month. And, in the most frustrating of ways, it wouldn't get worse and it wouldn't get better. So mainly I spent a few months with no energy.

Then (as I explain in the video, below), I was also working on an edit that was taking me much longer than it should have. And I was having to decide whether to put my bursts of energy to productive use on the edit or the blog.

Well... The edit got completed last week. And my cold finally manifested itself strongly enough last weekend that I went to Urgent Care for antibiotics. The past weekend has been interesting with the full-on cold. My "favorite" thing is that it's been messing with my voice. Want proof? Here you go:

Believe it or not, that's a massive improvement from earlier in the week. I had to speak in a work meeting and one person offered to get me flash cards...

I'm finally on the upswing. Which, happily, is happening at the same point that the seasons are finally changing and what has been a brutal late winter is turning into a fairly decent early spring in Minnesota.

I'll be baking this weekend, and should be back to a normal-ish blog next week. (Fingers crossed that I can speak well enough to be understood by the time I'm putting it together.)

Hope you've all been doing well! Don't forget to send me any kitchen (or editing) questions or comments, and ... I'll see you in a week.
Posted by Robert at 10:59 AM 1 comment: