It took a bit longer than expected, but I did finally get the Christmas Cake put together tonight.

I started - as you may have seen last week - by getting out the recipe
I started by going into the downstairs pantry (yes, we have a back-up pantry in the basement for things we seldom use), and figuring out what dried and/or candied fruit we had on hand, then went to the store to supplement.

Most of this stage of the prep process was just amassing and weighing things, but the dates did need to be chopped. I could have bought chopped dates, but - once chopped - they all seem to be coated in sugar (I'm guessing so they don't stick together). I didn't want the extra sugar, so I went for whole dates.
After much chopping and knife-clearing-off and more chopping, they got to here.

The following photo may look like a duplicate, but it is - in fact - a photo of raisins being chopped.
Finally, I reached for the tower o' questionable fruits that has been in the basement pantry for a few years. One of the nice things about candied fruits is that they seem to have a shelf-life which is roughly the length of an ice age.

The Candied Red Cherries were obviously a must.
The note on the side of the recipe specifically calls out the ability to ignore the grated lemon peel because it's already in the mixed fruit. So that meant that the Candied Lemon Peel was a must.
Finally, I decided to go with a fruit I remember from my grandmother's fruitcake: Candied Pineapple.
After a quick stir, it all seemed rather festive. 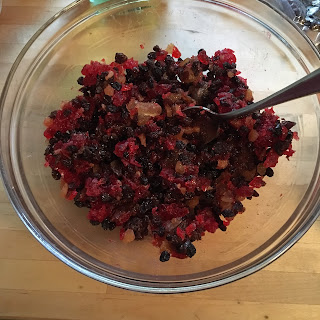 And what makes a fruitcake more festive than dousing it with booze? I have no idea!
Into a bowl and covered to hang out for 4 hours... 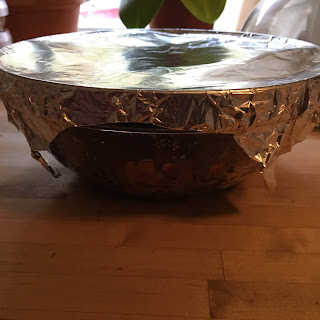 Then, when you realize that you're missing an ingredient for your cake, into a Ziploc bag so you can put it in the fridge until you're ready to use it all...
This brings us to tonight, so let me recap:


Yep. We're finally to the point of using eggs!

Everyone ready? Let's get this put together!

First, the ingredients (with stunt-double dried and candied fruit, since the rest is already prepped):
Does everyone remember how to cut a paper liner for the base of your pan? It's easy, if you use the "snowflake" method that we talked about a while back.
I know that I only showed one stick of softened butter in the video, but there are two in the recipe.
I weighed most of the ingredients for this recipe. I figured it was the safe thing to do. 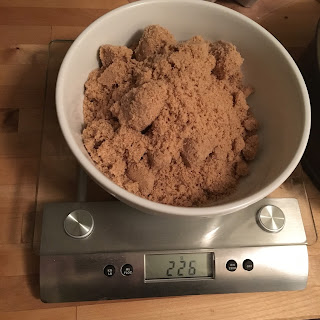 The sugar goes in with the butter (pretty standard baking procedure)... 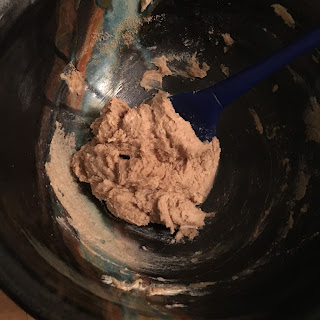 And then the eggs go in. (I didn't pre-beat them, I just put them in one at a time.)

I was a little surprised that this only takes two tablespoons of Molasses (subbing in for the Black Treacle). But it did make the kind of anemic batter...
...take on a ruddy complexion.
Weighing out the flour, mixed spices, pecans, and almond flour looked (and smelled) rather festive. 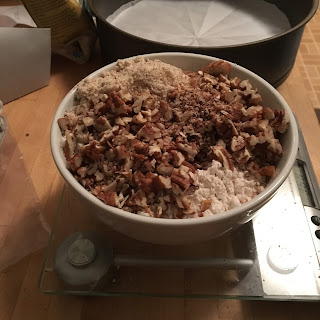 The first half of the flour and nuts and such went in quite quickly, followed by the - whew - pungent - boozy fruits.
Mixing all of this together - and the second half of the flour - did get a bit more difficult as it built up a rather solid batter.
Into the pan... 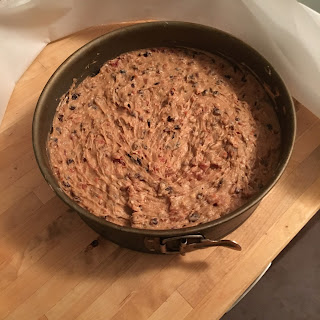 ...which got a nice Edwardian collar... 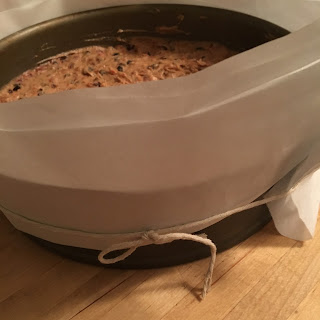 ...then into the oven.
After it cooled for an hour (note to self: if I make this again, I need to start early on a weekend day - not after work on a Wednesday), I flipped it over and removed the pan.
I was honestly a little nervous about peeling off the paper, but it came off with nary a crumb attached. 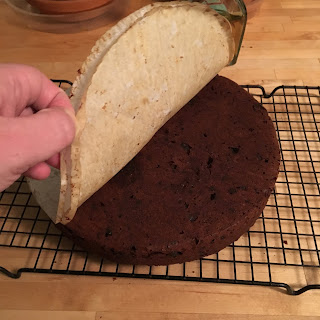 Somewhere in the midst of all of the evening's activity (probably about an hour into the cooking time, really), I started to notice how nice it smelled. As I peeled the paper back, I got another strong whiff of the spicy, fruity, boozy, Holiday-y aroma. It's a comforting smell, really. Even though I don't truly love fruitcake.

Next up: more Brandy, because something has to preserve this cake for the next 6 weeks.
I did add just a bit more than the prescribed two tablespoons at this point, because the wider surface area of the cake made it nearly impossible to cover with just that bit of liquid.
So... How does it taste at this point? Let's find out:


Yes, I changed clothes between videos. After all, it was past my bedtime by this point!

I think I already warned you that this isn't being seriously cut into until... well... Christmas. So we'll be checking back in on it in a few weeks. (Question for those who've made these before: Do I really have to do almond paste and fondant and things on top of it?)

-----
What food is the perfect ingredient in your Holidays? Is it something you want me to try out on the blog? Let me know what you're looking for, and I'll see what I can do! (Assuming, of course, that I don't keep misplacing ingredients...)

I've been having one of those weeks (or two or three of them, actually), and just when I thought I was going to turn a corner I ran into another hiccup. Let me explain:

So, there you have it. The cake is still in the ingredients stage (or at least the "most of the ingredients" stage), and I am set to show you the clips that haven't been shown before - but which I seem to have kept on my phone for no good reason. (Yay! Now there's a reason!)

(You may be able to play them all in a row from this link, or just scroll through them one at a time, below. Don't worry - they're very short!)


Maybe what I need is fewer props.


Oh, come on. Once they're baked I should be okay, right?


With any luck, I'll have the Christmas cake put together and baked by next week, and we'll continue to move forward.

In the meantime, please send me any questions or comments you might have - or suggestions for recipes - and I'll see what I can do to work them into the blog!

Just past Halloween. Not quite to Thanksgiving. It's the perfect time of year for pumpkin cookies! After all, they have all sorts of fall flavor - and they're not as spice-heavy as Christmas cookies.

Before we go on: How great to do those tomatoes look?

Here are some images of the recipe (which can also be found here):


I opted to make these in a bowl by hand, instead of getting out the mixer. It probably would have been equally as fast either way - and this way I didn't have to keep scraping down the sides and dealing with the gunk on the beater.

Dry ingredients went together, first:
A quick whisking, and...
In another bowl (in my case, a really nice, big pottery one), I creamed together the butter and sugar.
Now for the really wet ingredients - one of which really didn't want to come out of the corners of my measuring cup.
The one thing that will never be quite the same mixing by hand (instead of using an electric mixer) is the "blend until no lumps are left" idea. After a good mixing, this still had lumps of softened butter. 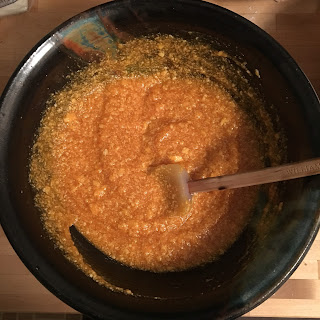 I wasn't quite sure if I was okay with that, so I switched over to a whisk, which did get it a little smoother, but not much: 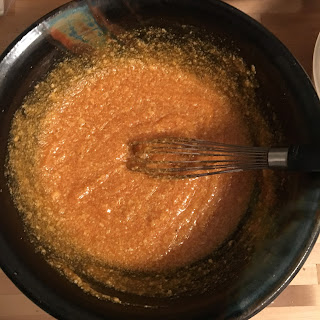 Finally, the dry and the wet ingredients got to play together in the same bowl.

One caution: as the batter gets thicker, it will want to stay on the inside of the whisk. Bashing the whisk against the side of the bowl will put inertia on your side and help you get it out of there. It may, however, also result in some "backsplash."

Finally, all of the flour mixture is in, and the batter/dough smooths out.
I used my small scoop, and was able to get 2 dozen on each greased cookie sheet. If you do the "rounded tablespoon" called for in the recipe, you'd probably only want to put about 15 or so on here. 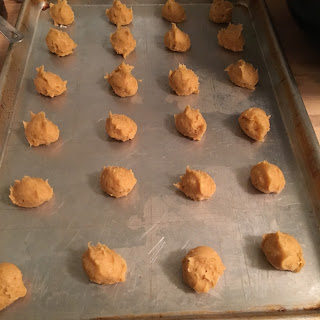 You may notice that one photo is missing from this set: the "in the oven" photo. I was good this week and didn't open the door to take any pictures! Aren't you proud of me?

These do need to rest - twice. Once on the pan for a couple of minutes to finish setting up before being moved to a rack, and again on the rack until they're cool so that you can glaze them and the glaze won't just melt and run off.

Speaking of the glaze... The ingredient list for it is in the final step of the actual recipe. (Not a great way to do it, but... oh, well.)
I've never made a glaze using melted butter, so that was a new experience. It turned out well, and it stayed a little softer than most of my glazes usually do.
It's funny how you kind of forget how much color cinnamon and vanilla extract have in them. But 4 cups of pure white powdered sugar went beige/tan pretty fast when it all got mixed together.

I don't have any great secret for how I glaze cookies like this. I just kind of drizzle the glaze off the spatula as I go back and forth. Sometimes that works better than others. (Check out the wrap-up video - and the eventual outtakes - for examples...) 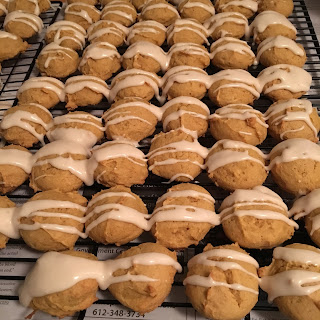 So, how did they taste - even with the gluten-free flour? Let's find out:

Oh, and if you want to see what happens when I get ahead of myself (or forget what I'm talking about, or get distracted by something shiny), I may have a treat for you in the coming weeks.

-----
Looking for something to fill the fall food void? Wondering what to bring as a side dish to the office Thanksgiving potluck? Trying to find the perfect food for a New Year's party? Let me know and I'll see what I can do!