The people I work with are a fairly varied group. Different ages, different backgrounds. But for the most part we do have strong opinions about food. (Thus we have the occasional bake-off as discussed last week.)

We also have discussions that come up such as "What do you call that peanut butter and chocolate bar that has cereal in it?"

You know, these bars: 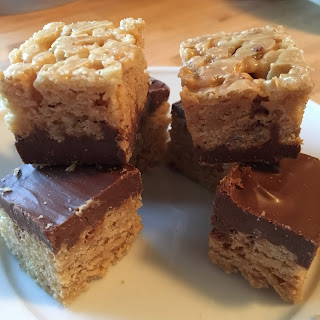 Are they Scotcheroos or Frosted Chews*? (spoiler alert: that photo is both)

For starters as we discuss how great these are - whichever cereal you use - we should discuss how few ingredients they have: 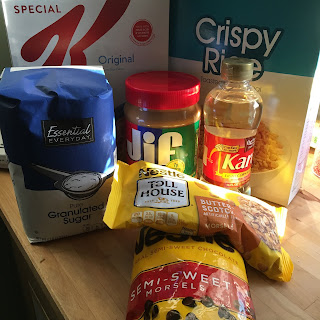 The recipes are the same (and are both on the Kellogg's website), but here they are. (Get the feeling that one of the sites is expected to bring in more money than the other?) 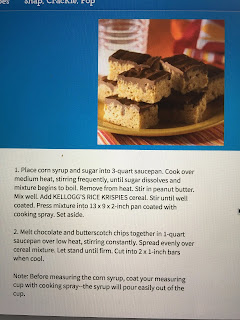 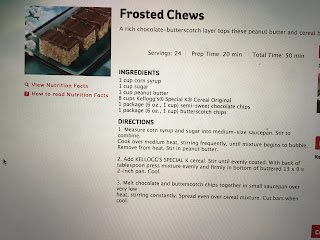 **REMINDER: This post is focused on two half batches, each one using a different type of cereal. If you're working with full batches... well... you'll have twice as much.

In case you're wondering what a pan full of sugar products looks like, here you go (it's a half cup of white sugar and a half cup of light corn syrup): 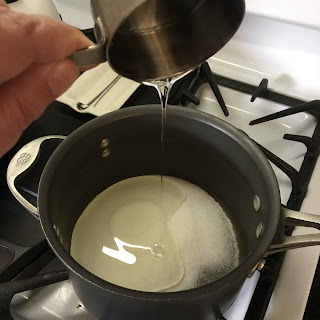 While that is on the stove over medium heat, it's a great time to grease your pan. Yes, I use old wrappers from margarine or butter for this (instead of sprays) when working with flat pans. And - yes - Christopher gets frustrated with all of the wrappers stored in the fridge. It's a give and take.

But - the actual point, here - you have to grease the pan (one way or another) or these bars will seriously stick.
Checking back in on the stove, we have now melted the sugar, and are to an all-syrup stage. 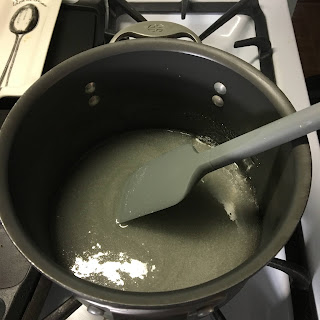 Somewhere around the point when it's finally beginning to bubble around the edges, I tend to start getting impatient. But you need to just keep stirring and waiting.
Luckily, it doesn't take too long for it to go from there to where it needs to be:

I have a few different recipes that I tend to make at about the same time of year that involve this same type of process, but with one major difference: This only needs to be brought to a boil - and then it's done. The other recipe needs to be boiled for multiple minutes.

I mention this because if you boil THIS for multiple minutes you'll end up with something more akin to a brittle - which is not what you're going for.

With the heat turned off, you can stir in the peanut butter.
It's a bit odd watching the peanut butter melt. The middle stage is weirdest.
Eventually, though, it's... well... let's just say that this next photo makes my mouth water. 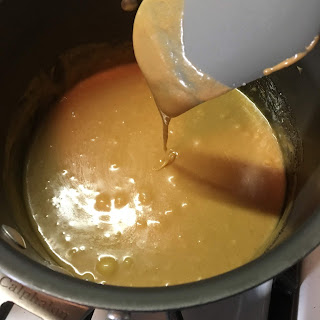 For our first half-batch of these, the next step included adding in FOUR cups of Special K.

You've got options on this. You could put the cereal in a bowl and then pour the liquid over the top and stir. Or - as I do - I just plan to use a large enough pan so that I can pour the cereal directly into the liquid and mix there. One less thing to clean up - and, frankly, I think I'm able to incorporate more of the liquid without losing it to the sides of the containers during the various transfers.
Tipping it out into the pan, it looks a bit odd and lumpy. And that's okay, because you need to press it down into the pan. 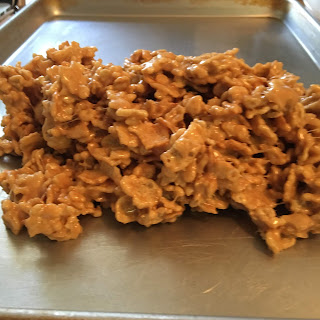 CAUTION: This stuff is hot as lava at this point - or at least as hot as boiled sugar - so you're better off using a spatula for this step.
The recipes talk about making these pretty thick, but we like them somewhere in between. A good gauge is to make them about level with the sides of the pan. (This also makes it easy to get more bars out of one pan.) 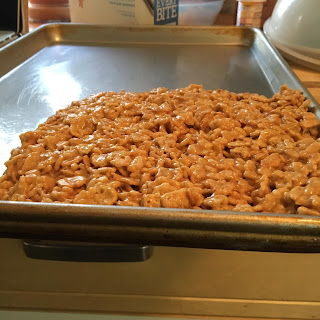 Yes, I know that this is precariously close to the edge of the cabinet. Do you know who else thought it had a chance that it might fall?

As we discussed earlier, the recipes are identical until you get to the cereal. For a half batch, of Scotcheroos, the peanut butter mixture gets just THREE cups of Crispy Rice.
Again, they look a bit odd when they first land in the pan... 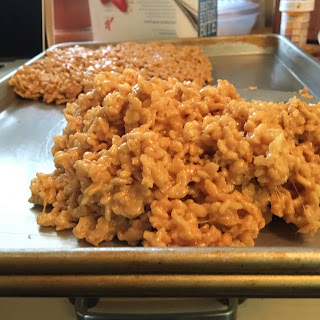 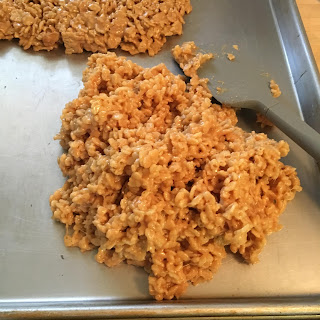 ...they turn out pretty respectably. 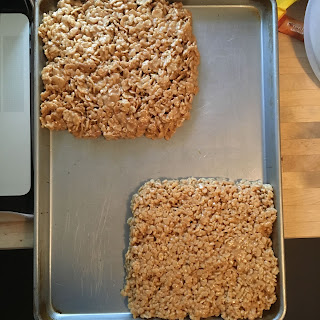 Though, they do look a bit naked, don't they? So it's time for some topping.

By the way: The recipe calls for Chocolate and Butterscotch chips - not Chocolate and Peanut Butter. In part, I'm sure this is because there weren't any Peanut Butter chips when the recipes were created. But - I have to admit - I've tried it both ways, and the Butterscotch chips give this a much better flavor. Using Peanut Butter chips left these really kind of flat and boring, in comparison.
As with the melting of the peanut butter, there's a point in this process here it really seems like the chips are never going to melt. 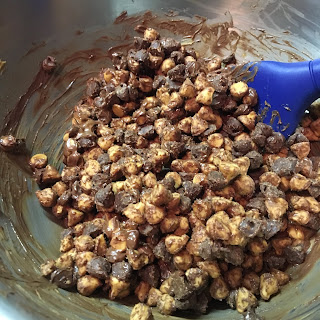 But, eventually, they do. 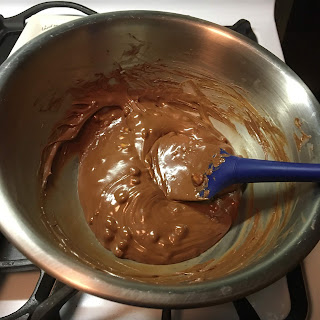 Once it's smooth, it's time to spread this onto the now-cooled bars. 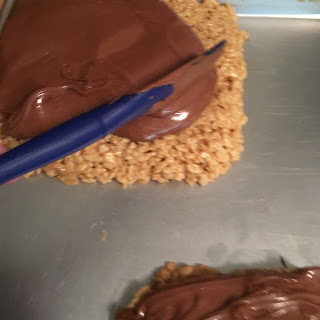 With the topping on them, it's kind of hard to tell which is which, isn't it?
Now the hard part: Letting them cool so that the top hardens. 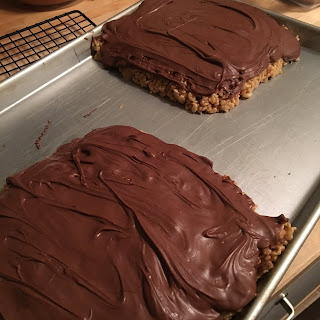 Once they're cool, I like to use my "Bash 'n' Chop" (that's the brand name of the old counter scraper that I have) to cut them, because you get good straight lines and have a lot of control, even with something fairly thick. 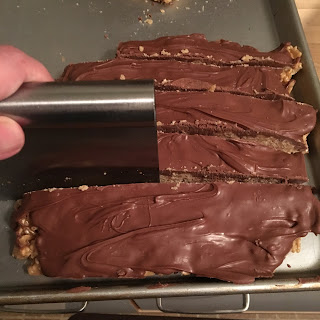 Since I was taking these to work, I needed to figure out a way to keep them separate. I went with some waxed paper - and flipped half of them upside down.
So, what's the difference between the two? Let's discuss:

Do I think one is necessarily better than the other? I'm not sure. I really enjoy the crunchier, more "substantial" dessert-bar texture of the Special K Frosted Chews. But the more candy-like texture of the Scotcheroos is nice, too. I think this may need more testing as time goes on... 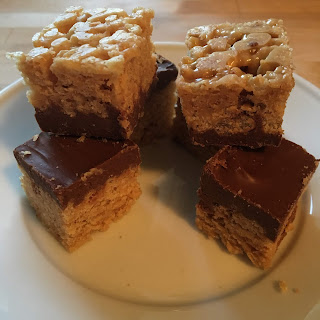 Oh. And if you've read this far along, you may be interested to know that I did not win the cupcake bake-off at work. I actually came in 3rd (out of 4) - with the tiramisu cupcakes coming in first. Basically, the two cupcakes that came in first and second had almost equal amounts of frosting and cake. Mine - and the one that came in fourth - had much smaller amounts of frosting in comparison. I'd like to think that - and, well, the fact that mine had turned blue - had something to do with my placing.

As for the Scotcheroo/Frosted Chew debate, at work the Frosted Chews got about 2/3 of the votes. 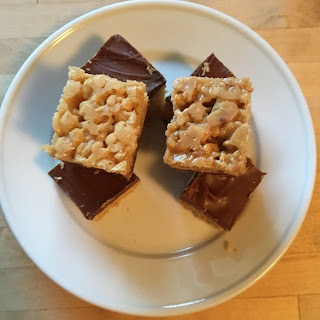 *I feel I should mention that, in our family, these are always referred to as "Joy's Frosted Chews" (not "Special K Frosted Chews") because a family friend made these every fall and so they've always been connected to her. Sentiment aside, though, they're really good no matter what you call them.

Is there something you've always wanted to try in your kitchen, but you wish someone else would do it, first? Let me know and I'll be your guinea pig!

Posted by Robert at 2:30 PM No comments: