As I mentioned last week, some blog posts take longer than others to complete. This one was actually started about two or three weeks ago, depending on how you count the days. There were two different batches of chili involved from start to finish. And at least 4 recipes, when you really come right down to it.
So, without further ado, here's the intro video, from October 14th:

The recipe that we were working off of for the first batch of chili - the one that went to work with Christopher - looked something like this:
Basically, we started with the solid ingredients that you'd expect:
And a bunch of spices and stuff:
We followed the random recipe from the Internet as our starting point, going by what we figured just made sense. Remember: These two batches were the first times Christopher had made chili, and it was a much more complex version than I'd ever made, so there was a certain amount of guesswork involved.

We started with a bunch of chopping. Onion, poblano, jalapeño, and ancho. (Did you know that ancho chiles are simply dried poblanos?)
The next step in cutting was the chuck roast - about 1.25 pounds' worth - that went into about 1.5-inch cubes.
As a nod to both my mom's recipe and the recipe we were working off of, we had ground beef - and bacon - to add, as well.
First into the pot (with a little oil) were all of the vegetables.

Meanwhile we fried up the ground beef and bacon in a separate pan (in part to keep from getting all the extra fat in the chili).
A quart of beef stock goes in with the veg, and it all simmers so that the flavor really blends.
In this, the second batch, we strained out most of the vegetables from the stock once they'd cooked down.
Once the broth was out of the pan, we browned the cubed roast on all sides, then added the ground beef and bacon in.

Next stop: two 28oz cans of tomatoes. These could be whole (though you'd want to break them up a bit while stirring) or diced. We chose diced.
I have to admit that it looked a little sad with the tomatoes, at first. 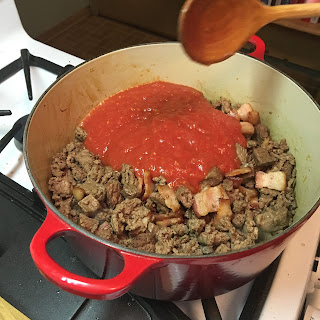 But then the beef stock went back in along with some garlic... 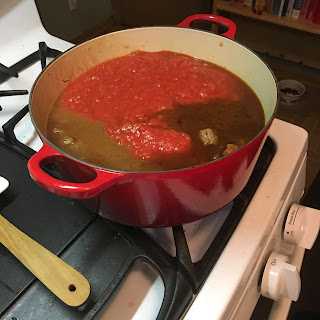 ...followed by a bunch of spices... (This is the point in the recipe where my mom would say it's time to "tart it up" - spices and spice levels are up to the person putting them in.)
...and pepper...
...and even a bay leaf.

Honestly, at this point, once it warms through you'd be done. 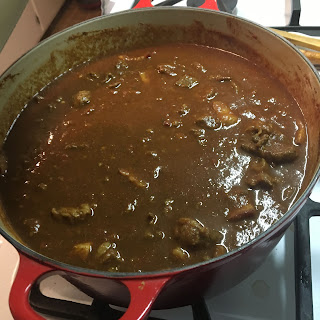 But if you'd prefer it to be thicker and less soup-y, you can leave it on the stove to simmer and eventually the liquid level will slowly go down. 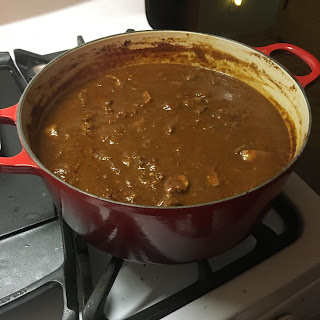 And, slightly more eventually, you can ladle yourself a bowl of chili and put a dollop of sour cream on top.
So, how was it? Well, the first batch - the one that was "a little sweet" was fine, but definitely needed some tweaking. The second batch - the one in the photos, above - was certainly not overly sweet...

As I mention in the second video, I know that this isn't exactly a "recipe" post - it's more of an idea post. But if you start with the basics - meat, tomatoes, and spices - you're on your way to making your house smell amazing - as well as making yourself a really satisfying dinner.

How much is a lot?

Well, I started with two Bundt cakes (though I decided I actually wanted three, so I made another the next night).

From there, I moved on to about 11 dozen chocolate cookies.
And - because not everyone wants fall foods just yet, I topped it off with two pans of lemon bars.
Of course, then I had to get them to the church.

Luckily, I had just the way to do that, thanks to my recent savvy car buying. Let me explain (and wrap this all up):

So, there you have it. The perfect excuse to buy a new car. (Not to mention that my last car was 18 years old, the dashboard lights only worked about 1/4 - which is better than when they were completely out, and the roof leaked when it rained.)

I promise that next week there will be food - and it's not even a baked good!

We're getting into the fall baking/cooking season. What says fall to you in the kitchen? Is it apples and spice? Is it chili? Is it some kind of football fare? Let me know!

Posted by Robert at 8:52 PM No comments:

Before I begin, I feel I should give a follow up to the Potato Chip Bars from last time: A little time did them a world of good. It seems that, after they were baked, the chips softened a bit more. So, when I took them to Book Club the following Monday (about 2.5 days after making them), they were actually well received. (And this is a group who can be trusted for their honesty.) I still don't plan to add them to my standard repertoire, but I'll give tasty credit where it's due.


But, anyway... This week I decided to address something you've asked about. 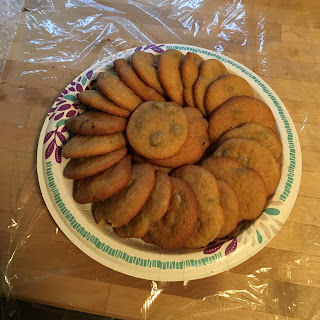 Well, not all of you asked, but some of you did. So we're going to look into how I ship all of the cookies that I ship without people simply getting bags of crumbs in the mail.

Since the topic is a bit different than usual, this week we're going to do something a little different with this post, too. I'm going to give you a video that kind of goes start-to-finish, and then I'll follow that with some step-by-step photos. Sound good?


Two things about this video: it was filmed in the fairly early morning, and I'm wearing what I had just worn outside to walk the dog.


For this demo, we're using chocolate chip cookies - the ones from the 1950 Betty Crocker Cookbook that I've featured on here in the past. (You can find a link here - or here, actually, too.)

An approximately 8.5-inch basic paper plate is our starting point for this package. I think most brands (whether name brand or house brand at a grocery store) have something about this size - which fits into a regular flat-rate envelope from the Post Office really well.

For a non-frosted cookie of a relatively consistent size, I find that stacking them around the plate in a circle works really well.

They aren't straight up and down, perpendicular to the plate, because that would make them too tall when you try to put them into the envelope. 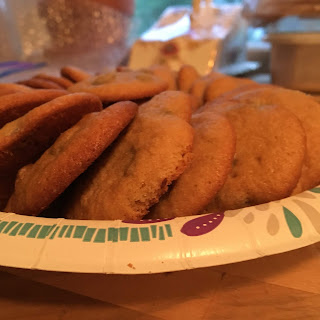 Oh - for the record - if you use one of the smaller plates - which can also hold almost two dozen cookies, they tend to get too "tall" for a flat rate envelope. Why? Because you have to stand the cookies up straighter to get as many to fit. 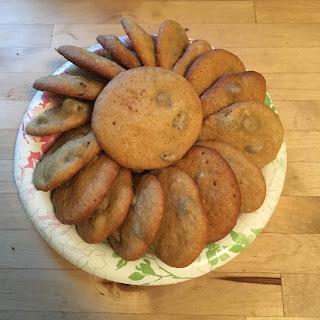 Okay. Now that the cookies on our larger plate are ready, it's time to start wrapping.

First, we have a double layer of plastic wrap. This helps keep them soft, as well as doing the bulk of the work to keep them in place during shipping. 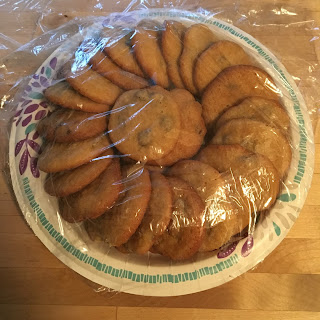 Next up: the primary way to keep them from getting broken - I typically use bubble wrap. (Though I have used newspaper or other heavyweight tissue paper with decent results.) 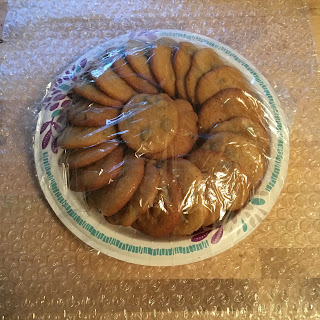 I like to use enough bubble wrap to get a double layer of protection on the top. I don't know that it really makes that much difference, but it makes me feel better. 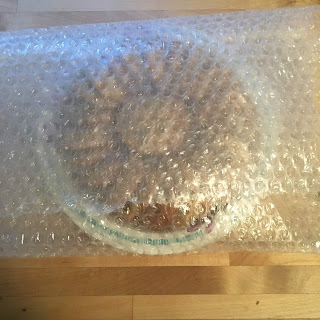 At this point, you can add a card - possibly a postcard - slide the whole bundle into a Ziploc bag, and then into the shipping envelope.
If the plate is just a little too wide for the envelope, you can roll the edge just a bit (this is one of the perks of using lightweight paper plates). 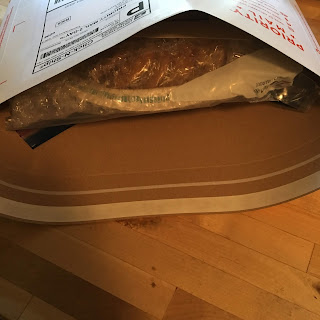 Once you seal it, the envelope is really no thicker than most packs.
And there you have it: One mailing envelope full of happiness! 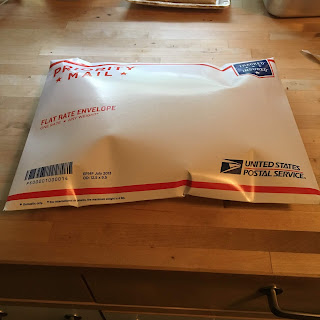 Even better - at least for us - this is an envelope of two-fold happiness. I tend to bake for stress relief, but don't want to have all of the cookies in the house. So we're happy to see the cookies leave - and (I assume) people are happy to have them arrive, as well.

Would you like to receive cookies in the mail? If so, watch this space in the next couple of weeks. As soon as I can get the logistics figured out, maybe we can make that wish come true for a reader or two...