Apparently This Was a Bread Weekend

I realize that a lot of people are now at home and realizing for the first time that they have kitchens. These seem to be the people who have caused the stores to be out of flour, sugar, and eggs.

As someone who bakes and cooks regularly, I'm mostly happy for these folks - because I think a lot of them will enjoy the kitchen.

At the same time, I have to admit that I'm a little worried for a few of them (I know some people who are just discovering their kitchens - and maybe would have been better without that discovery). And - honestly - I'm also a tad frustrated with how hard it's been to find those basics in the stores.

But I am happy that people are trying new things - and so I thought I should, too.

And, since we do happen to have some bread flour and yeast in the house and - since I wasn't going anywhere this weekend - I decided to try making a kneaded yeast bread for the first time. 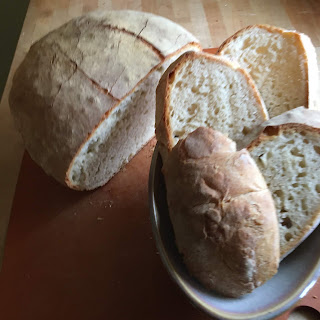 It's been a while since I've posted (as some of you have been kind enough to mention), and so I don't remember exactly how this all goes, but I guess I should add a video intro about here...

Just a basic heads-up: The first video in this post comes in at just about 6 minutes long (the others are MUCH shorter). I cover a lot of ground in this one, though: what was going on when I last posted (January), what I've been doing since, who gave me the book I'm holding, and - oh, yeah - some stuff about why I'm baking the recipe I'm baking. I think it's worth it, but obviously it's up to you.

So... "Strange world" is probably a bit of an understatement these days, right? But spending some time in the kitchen can definitely be a great way to work on some relaxation. (Unfortunately, it's gotten a tad difficult for me to spend much time in my other favorite place - the grocery store.)

I looked through some cookbooks for a basic bread recipe, and kept finding things that had all sorts of exciting, exotic ingredients - which we don't have on hand. But I found a 4-ingredient bread recipe in Appetite by Nigel Slater: 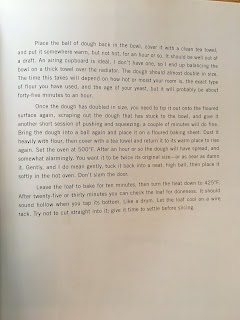 So... four ingredients:
And a big bowl to put them in: 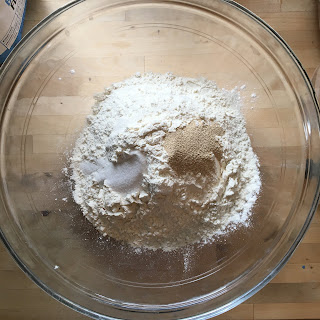 The next steps deal with mixing. And since I was about to get my hands dirty with the kneading, I figured I'd just go in hands-first:
The recipe talks about only putting in "most of" the water, so I started out with 1 1/4 cups out of the 1 1/2 cups. 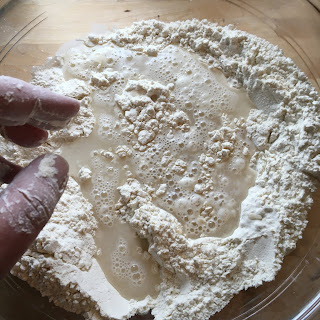 Mixing that in, though, didn't give me the "sticky dough" that the recipe talked about: 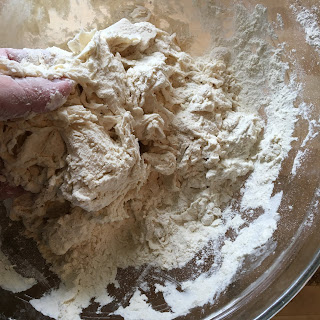 I added a bit more water, little by little, ending up with about and extra half cup on top of the initial 1 1/2 cups - which gave me this sticky mass: 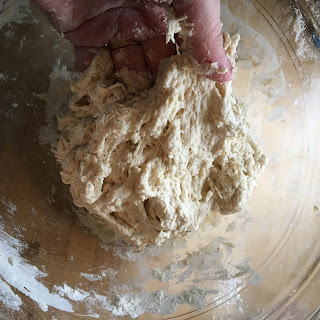 Flour on the board: 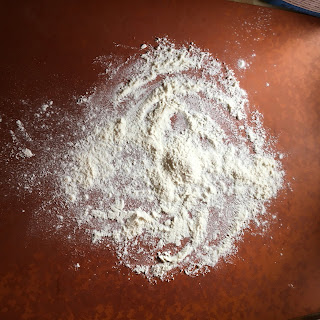 Dough on the board: 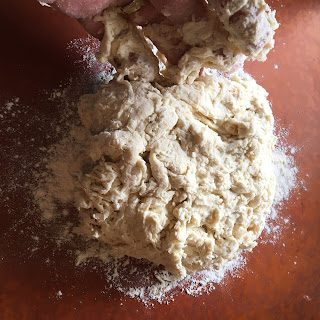 Kneading the dough:
About halfway through, it was already starting to look more like bread dough: 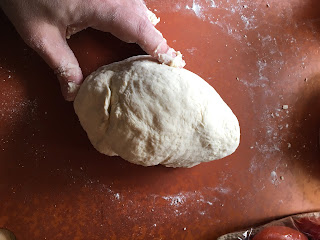 Since the recipe talks about the dough doubling in size, I did a quick measure before I put it into the bowl. 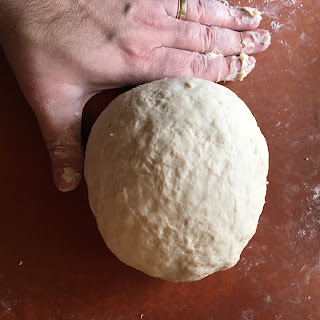 This went into a bowl with a towel over it and onto the top of the fridge - the warmest place in our kitchen. 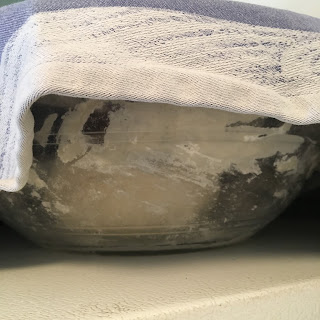 Unfortunately, it was a rainy, chilly March day, and the house was only about 67 degrees. So even after leaving it for an extra half hour (so a total of about 1h20m), it still hadn't fully doubled in size. 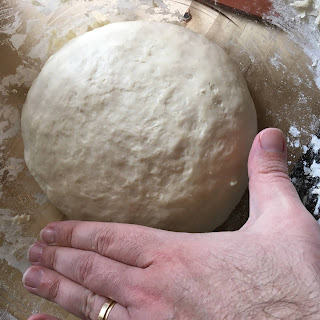 I figured I didn't want to leave it in the first proofing stage for much longer, so I went ahead and flipped it out onto my floured board, kneaded it for about another 2 minutes, then plopped it onto my baking sheet. 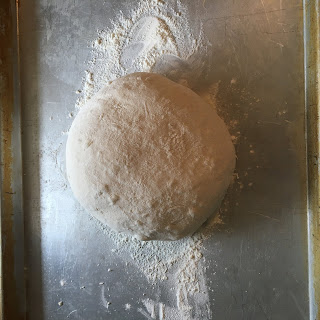 For this proofing, though, I moved it to the top of the stove - which had already started preheating. 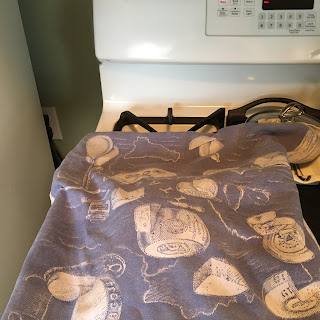 That move was definitely worth it. The dough easily doubled while it was there. 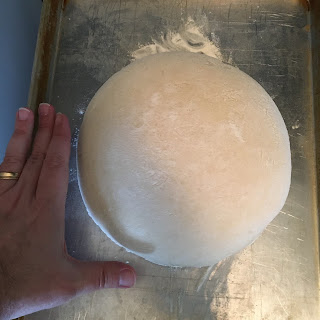 I decided to try cutting a basic design in the top, once I got it kind of "grouped into a high ball" as the recipe suggested, and then figured it was on its own as I put it into the oven. 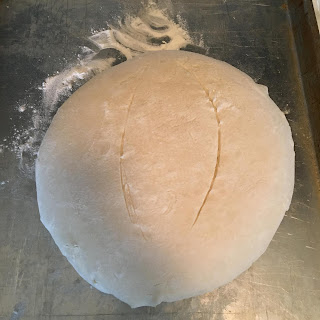 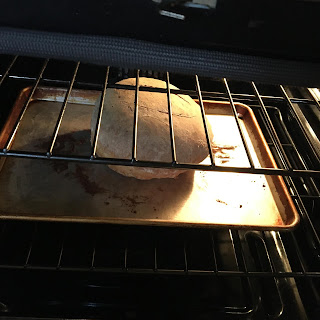 After the 10 minutes at 500 degrees, and 25 minutes at 425 degrees, I pulled it out of the oven to flip it over and see whether or not it was done. 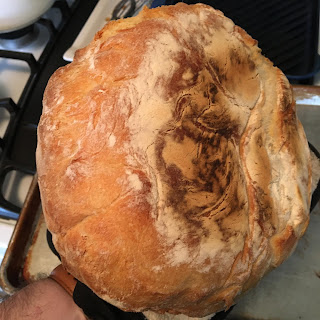 The bottom wasn't much to look at, but... well... you gotta hear this: 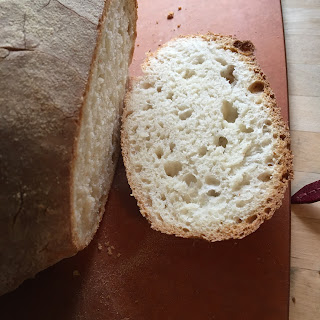 And it was really pretty when I put it out, too:

Overall, it was pretty good. I'm not sure about the really thick crust - and whether that was on purpose, or something that I did.

I will say that Christopher and I both enjoyed it with our dinner, and I'm sure we'll enjoy the rest of the loaf over the next few days.

And I'll also say that it was great to take the time to try something new - I hope you're all taking the time to try new things these days, too. (Or not - I mean... whatever makes you feel better in the long run.)


*****
So, what are you up to in the kitchen these days? Is there something you'd like me to attempt so you have some idea how it goes? Or just a question about what to do with the ingredients in your kitchen? Let me know and I'll see what I can help out with!