A while ago, when I was making different batches of chocolate chip cookies, I had one question come up that I actually didn't answer.

(If you're not sure what this chocolate chip cookie testing was all about, I'd say start here: Betty Crocker's Chocolate Chip Cookies (circa 1950) and then work your way through the 3 or 4 blog posts that follow it.)

The question that came up was a question of why I grease pans (when I do - not all cookies need it) (though these chocolate chip cookies definitely do) with a "butter paper" instead of with a spray.

Okay. First of all, you all know that I usually use margarine, so "butter paper" is a bit of a misnomer, but I do typically use the margarine stick wrapper paper to grease my pans.

On the one hand, I figure cookie sheets are flat and easy to work with, so why waste?

On the other hand, I hate how sprays tend to get all over the kitchen - even if you're careful.

So I do it the old-fashioned way.

But, during my last chocolate chip cookie baking, I decided to try it out both ways. (No, I'm not doing lots of photos, because the recipe and all that are in the post, above.)

The cookies went into the oven on the same pan - half the pan was sprayed, half was hand-greased. I figured that would give us the best results.

About halfway through the baking, I glanced into the oven and thought "What the heck is going on? Why are those so different?" and then realized - oh, right, testing...

Overall, the cookies turned out the same. It's just that the edges of the "sprayed" cookies melted a bit more when they first got into the oven, so they spread and got crispy. The "hand-greased" ones stayed a little more centralized.

Here's how they looked: 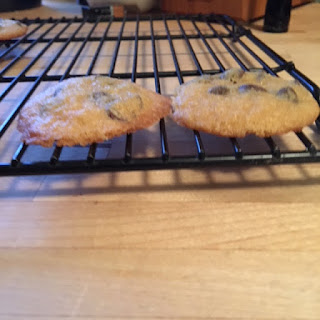 Was one better than the other? Well... I prefer chewier, so I think that the hand-greased batch were tastier. But, with milk, I enjoyed the ones with the crisper edge. (There's a definite chance that I just like chocolate chip cookies, in general.)

What do you think - crispy or chewy?

Have a kitchen question you'd like answered? A recipe that you're looking for - or looking for the courage to make? Let me know and I'll see what I can do for you in a future post!
Posted by Robert at 11:27 AM 1 comment:

Coconut-Lime Sugar Cookies (If spring won't come to me...)

I'm seriously hitting a point where spring just needs to show up. I know that we have snow in April pretty much every year in Minneapolis, but it's usually interspersed with 50-degree days (and mud). This year, the ongoing "colder-than-average" temps, combined with snow that doesn't seem to end, is getting to all of us.

A couple of weeks ago, I bought some limes for a project that I ended up changing. And so with limes in the fridge I figured I was left with two options: Margaritas or baking. We have no tequila in the house, so I went for baking. 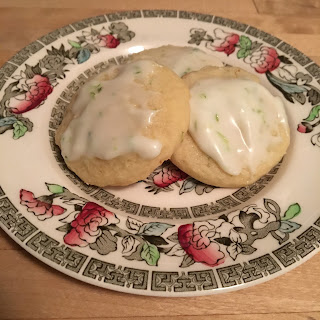 Here's the thing, though: I'm not really a "make it up as I go" baker. If you've been following me for any length of time, you know that I tend to fall back on tried-and-true recipes (or random new things that I've found a recipe for), instead of making things up on my own.

I do have one sugar cookie recipe, though, that I have already altered in the past (with lemon - and later with lemon and lavender), so I know that it plays well with add-ins. And, thus, with a friend's suggestion in the back of my mind, that lime and toasted coconut would work well together, I decided to try it out.


I'm pretty sure I've used this sugar cookie recipe before on the blog, though I can't find it. So here is the recipe as I have it from my mom:

Although I was making it up as I went along, I did want to measure things, in case I wanted to do it again. So I started with half a cup of coconut. 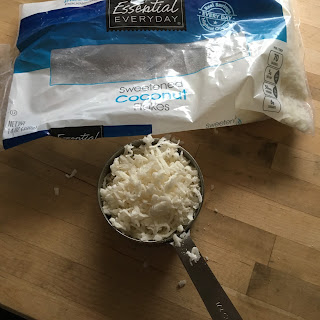 I wanted the coconut to be able to cool before adding it in, so I started that early (as you probably saw in the first video). I simply poured it into a dry pan on med-high heat, and stirred it around a bit as I waited until it was toasted. 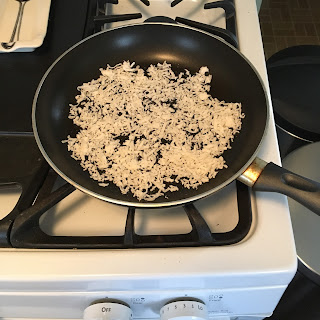 How do you know when it's toasted? Well, I went for "when you can smell it, it's pretty much done."

I turned off the heat just when I started to smell it, and it looked great. Unfortunately, I didn't remove it from the pan, so it did get a brown, toasted color to it. Don't worry - it still tastes great, either way. And the fact that it was sweetened didn't seem to matter, which was a nice surprise. 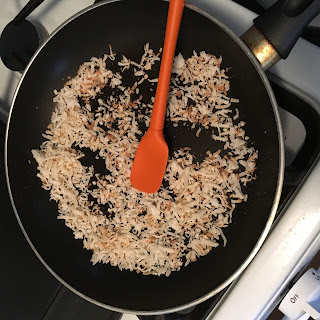 In working with these with lemon, I've learned that about 2 teaspoons of zest work for a full batch.

I recommend putting this in with the sugar, so that the oils can flavor the sugar before it gets "blocked" by the fats. Note: I recommend doing that - even though I may have gotten ahead of myself (as you can see in the photo above).

Oh. Speaking of the fats. I have a note from long long ago that says "works best with half shortening." Shortening, in this case, refers to something like Crisco, and I have to agree that these turn out best if it's half margarine (or butter) and half Crisco. Not sure what the chemistry is behind it, but it is what it is.

Fiona has apparently decided that she likes to supervise in the kitchen, and she did so during these cookies, as well. 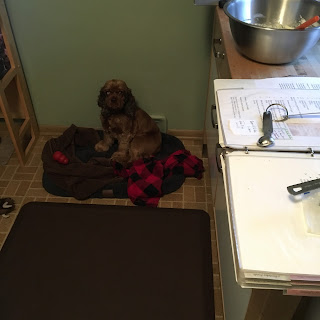 When working with the lemon version, I tried out the amount of juice to use and found that swapping out 1 tablespoon of lemon juice for the 1 teaspoon of vanilla seemed to work well, so that's how I went with the lime juice.

Of course, this throws off the liquid/dry balance, so I also learned to add an extra half-cup of flour when making the modified recipe. With this new version, however, I was going to be adding my toasted coconut, so I kept the lower amount of flour.

I'm happy to say that the consistency of the dough was pretty much as expected, so I went ahead and dropped them onto an ungreased cookie sheet.

The next steps are kind of odd, but seem fairly important. For some reason, these don't like to flatten on their own (though they will spread just a bit), so you need to help that along.

You start with a plate of sugar, then "dip" the bottom of a glass into the bowl of dough to get it "primed" to pick up the sugar. 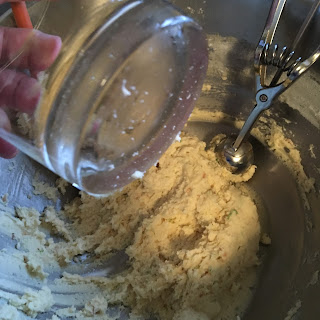 Dip into the sugar. 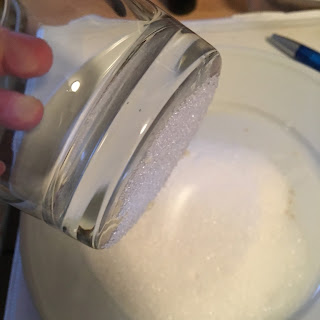 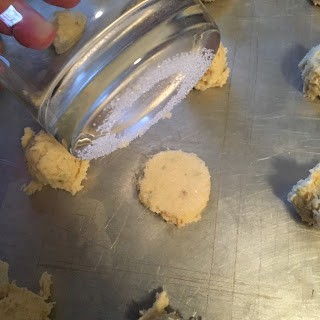 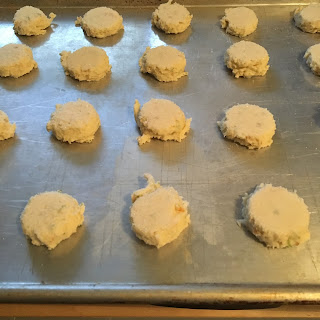 It's a great way to get out some of your aggressions - but don't go too far or you'll end up with wafers...

If you're someone who is never quite sure when cookies are done, these are a great cookie to work with. The "touch test" will go from the cookies being "airy, but mushy" on top when they're still under way, to feeling just a bit firm when they're done. 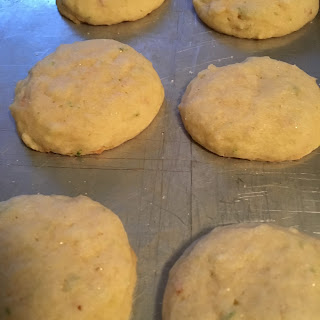 They also get a really nice golden edge around the bottom, which lends a nice texture once they cool.

I know from working with the lemon ones that these cookies never seem to have quite as much flavor as I want. (The original version simply has a calm vanilla undertone - but I always feel like there should be more kick with citrus.) So I decided to frost these.

My basic frosting recipe is:

I know there are tons of recipes in the world for different frostings - from ganache to royal icing and everything in between - but I tend to go by feel on this.

Each cooled cookie got a quick smear of frosting, and then they needed to sit on the rack until the frosting fully set up ("hardened" seems like to "hard" a word for this). 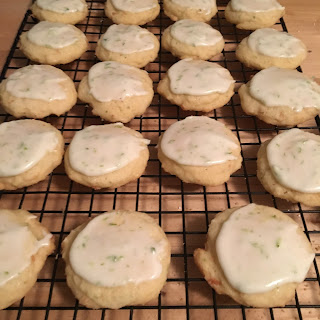 How did they taste? Well, Fiona was too tired/bored to give any opinion, ... 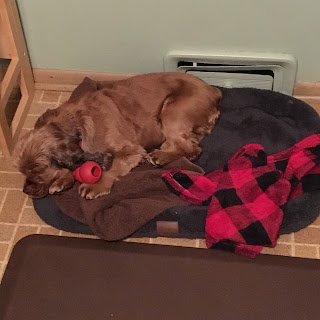 so I had to do it myself:

Here's hoping that you're getting spring wherever you are - or at least you've got a plan for bringing it on your own!

Any ideas for what I can do to get spring to come even faster? Do you have a go-to spring recipe? A favorite Cinco de Mayo recipe you're hoping to find? Let me know and I'll see what I can do to add it to a future post!